Slightly edited from the original article:

Changing the nappy at Kensington Palace, when the moment comes, may be easier thanks to a gift to the Duke and Duchess of Cambridge from the Finnish government, writes Mark Bosworth in Helsinki.

When the Magazine wrote last month about the baby box given to all expectant mothers in Finland – and the role that it may have played in helping the country achieve one of the world’s lowest infant mortality rates – people from all over the world contacted the social security service Kela asking to buy one.

The duke and duchess were not among them, but as they will shortly have a use for the clothes and other mother-and-baby items inside the box (there is even one item for dad) Kela decided to send one to the expectant parents.

“Kela wanted to congratulate the Duke and Duchess of Cambridge,” says spokeswoman Heidi Liesivesi. “The maternity package gained such a positive response from all around the world. The timing was perfect that the royal couple are having a baby.”

Contents of the box 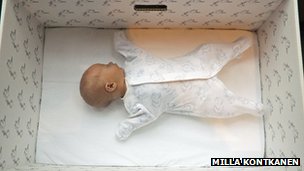 Kensington Palace has confirmed that the parents-to-be received the box last week. “We were delighted to receive the very kind gift of the maternity package from the Finnish government. It was a very thoughtful gesture and we’re very grateful for it,” says a Kensington Palace spokesman. “I’m sure the Duke and Duchess will be very interested to see the contents.”

The palace does not accept gifts from commercial organisations, but is happy to receive presents from individuals and foreign governments.

The Duke and Duchess of Cambridge are the second royal couple to receive a baby box from Finland. In February last year, Crown Princess Victoria and Prince Daniel of Sweden were given one to celebrate the birth of Princess Estelle.

As well as containing essentials, the box can also be used as a bed because it comes with a fitted mattress. Many Finnish babies have their first sleeps in these cardboard cots. So will the royal baby sleep in a cardboard box? It’s hard to imagine, but anything’s possible.

Check out the contents of the current maternity package.

Read more about the history of the box.

With the help of researchers at France’s Grenoble Institut Polytechnique and the Centre Technique du Papier, a Finnish materials company called Ahlstrom plans to introduce an affordable, consumer version of wallpaper that blocks Wi-Fi signals. The wallpaper can block Wi-Fi signals in the 2.45 – 5.5 GHz range, while simultaneously allowing television, FM radio, and mobile phone signals to pass through its surface. Metapaper can be applied to a variety of surfaces including concrete, brick and plaster, and won’t be affected by decorative additions such as a layer of common house paint.

According to the Financial Times, everyone eats pickles in the sauna in Finland!

According to YLE, the playground equipment maker Lappset Group wants to build Finland’s first Angry Birds- themed activity park in the town centre of Rovaniemi in Lapland. Also the Sundown Adventureland, a theme park based in Nottinghamshire, is opening Britain’s first Angry Birds activity park near Retford. If the plans in Rovaniemi go ahead, the activity park will feature a 150-metre running track, climbing equipment, a sandbox, a merry-go-round and a grand Angry Birds slingshot. It is also launching an Angry Birds-branded debit card in Russia in partnership with a local bank.

Finland’s first grocery store wall opened in Helsinki’s city centre on 4 June 2012. Kauppakassi (“Shopping Bag”) grocery store walls can be found in the underground tunnel that leads to the Sokos Department Store in Helsinki. The stores span some 20 metres of wall space

The mobile phone grocery walls contain a selection of products from the grocery store chain Alepa which can be purchased by scanning the barcodes of the products using a mobile phone.

Alepa’s Kauppakassi service is provided through the Foodie.fm online shopping and food recommendation service developed by the Helsinki-based company Digital Foodie. On 23 May, Foodie.fm and the S Group won the Gold Medal in the Channel Innovation Awards competition in the US.